Book Review: Let the Right One In by John Ajvide Lindqvist 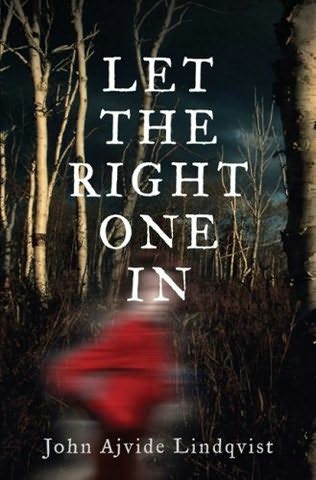 Book: Let the Right One In

Plot: It is autumn 1981 when the inconceivable comes to Blackeberg, a suburb in Sweden. The body of a teenage boy is found, emptied of blood, the murder rumored to be part of a ritual killing. Twelve-year-old Oskar is personally hoping that revenge has come at long last—revenge for the bullying he endures at school, day after day.But the murder is not the most important thing on his mind. A new girl has moved in next door—a girl who has never seen a Rubik’s Cube before, but who can solve it at once. There is something wrong with her, though, something odd. And she only comes out at night….

Its like somebody died in there !!! oh wait Somebody did !! 😛

Huge thanks to Kavita Ramesh for recommending this book unfortunately I am not able to share the same zest for the book as her as I am kind of not a big fan of the book 😦 (sorry kavita !! )

The book for me didn’t work out because it sort of required the readers to put in the efforts and I am not that kind of a reader. I am more of a lazy reader who wants everything spoon fed and simplified and the book is exactly opposite to that but on the other hand those who love a bit dark and out of the normal path books, then behold for this is the answer to your prayers.

The book is very dark, gloomy and melancholic and the narration itself is tricky in bringing instant gloominess. Its very depressive but that in turn creates and perfectly complements the theme and tone of the book and that is something worth to be mentioned.

For one I think the translation may not be totally justified to the original tone of the Swedish one, not that i can read Swedish or have read the original book, but more like a gut feeling that maybe unlike the original work, this one is montone and almost robotically (or is it just me? ) Well as my friend, Kavita Ramesh pointed out when we discussed the book, the book does bring out a perfect tactical narration to make sure that you never miss the secondary and supporting characters. In fact the author has put so much effort into it that you feel the story belongs to each of these characters in the book and not just the two central characters

The book is not going to be an easy ride because the book is one of those that really demand an undivided attention. It is the kind of the book that requires effort from the readers as well. But even though dark and more based on human psyche, it is very strong and powerful in its content. Just that it need a bit patience and an acquired taste.

CATCH THE TRAILER OF THE MOVIE BASED ON THE BOOK